Biofuel and Biomaterial Crops: We Might Be Doing it Wrong

As I was recently dulling blades while chopping switchgrass for some experiments, I started thinking whether the "high yield perennial grasses on marginal land" paradigm makes any sense for biofuels. There are many positives about using perennial grasses. They are low maintenance, high yield, require low additional nutrients, and have broad growing ranges.

However, even with these salient advantages and decent government funding, the "high yield perennial grasses on marginal land" paradigm has not yet become a reality. Three key elements seem to be holding it back.

If these problems cannot be overcome quickly, is there another way to sustainably, and quickly, produce low-input non-food biofuel and biomaterial feedstocks that could create a sustainable Advanced Biofuel/Biomaterial industry?

What follows are my thoughts on these questions. I can't say they are completely worked out, but I hope there's enough here to get the Advanced Biofuels/Biomaterial community to seriously consider this issue.

In his 2006 State of the Union Address, President George W. Bush spoke enthusiastically of a biofuels future that would be based on switchgrass. Stock prices of companies that sold switchgrass seeds soared and USDA/DOE bioenergy funding was quickly shifted to high yield perennial grasses.

To explain this failure, the DOE/USDA approach was deficient in the following ways:

And so, at the end of 2014, the acreage of switchgrass planted because of USDA bioenergy subsidies is rapidly disappearing as growers go back to more profitable crops.

Yes, but sufficient funding would have to be made available to correct the mistakes listed above. In addition the R&D would take the better part of a decade.

However, given the anti-biofuel focus of the Obama "Natural Gas is Good for the Environment" Administration and both parties in Congress, it is very unlikely this will happen any time soon.

Therefore, we must quickly begin the search for low-cost solutions we can implement immediately. Fortunately, I think there is a simple, sustainable, and successful alternative for the next decade that would create a multiproduct "advanced" biomass industry.

The Future is US Corn Ethanol Land

Contrary to the dire predictions of long-time corporate farming critics, anti-corn foodies, and several economists, the increase in U.S. corn planting needed to meet the 10 percent motor vehicle ethanol requirement did not result in a world-wide food price disaster. In fact, improvements stimulated by the ethanol market combined with stabilized ethanol demand, and financial speculators leaving agricultural futures for markets they could more easily manipulate, has led to corn prices around $3.70/bushel. This is close to prices in the 1970s and 1980s. (Since these prices are not corrected for inflation, corn is cheaper than it was thirty years ago.) 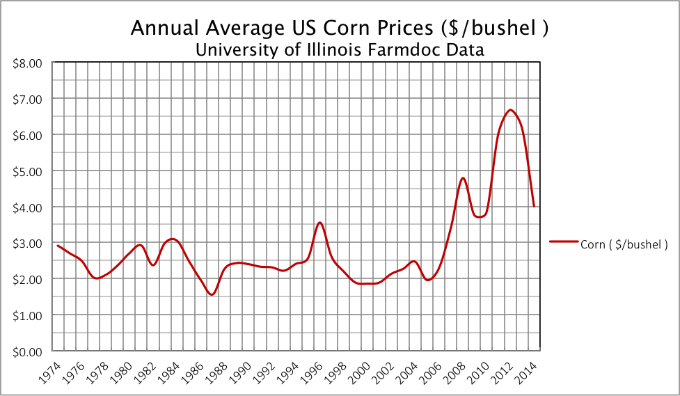 An Opportunity for an Advanced Biofuel & Biomaterial Renaissance

With U.S. ethanol demand currently being capped by the Administration's decisions on both RFS ethanol volume and E30 certification fuel, the combination of excess corn production and excess ethanol capacity will continue to drive both corn and ethanol prices lower.

With approximately 20-25 percent of current U.S. corn production being used for fuel ethanol, the questions for growers become:

I think the right answers to these questions could not only retain grower incomes but more importantly, could be an opportunity to build the foundation of a true Advanced Biofuel and Biomaterial system. This system would have the following characteristics.

So, what type of crops could serve as the basis for this system? A very good starting point would be root crops. Why? A root has the ground around it providing support. This support means a large quantity of biomass can be accumulated without the complex cell wall structure needed to support a plant stalk. Without that structure, the primary cell walls of the root can be more easily accessed by enzymes. This means a quicker, less expensive biomass conversion process is possible.

A Place to Start

If the yields could be maintained, the acreage needed to produce current ethanol levels from energy beets could be significantly reduced. This could produce opportunities for additional beet acreage to be used for bio-jetfuels or biomaterials. In addition, other root crops, especially ones that could provide medium to high-value polymers should be considered for specialty markets.

The result of the switch from ethanol corn to general use biofuel/biomaterial crops could provide the reliable supply of biomass feedstock needed to create and sustain a diverse Advanced Biofuel and Biomaterial industry.

By so doing, it would create a financial climate that would bring private investors back to the arena. Researchers on the crop development side would have the money to develop lower input, higher yield crops while biochemists and biologists could bring new bio-based polymers to market as well. And, who knows, maybe even easier to process perennial grasses that could be grown on marginal lands could be developed as well!