But there's one plentiful, renewable resource that America is overlooking: animal manure.

Our industrial-scale farms produce bull crap, chicken poop, and pig manure in great abundance. A single cow can produce 30 pounds of manure per day. But in America—where farmers often have vast acreage, electricity is comparatively cheap, and regulations are relatively lax—there hasn't been that much pressure on (or incentives for) farmers to do much more with manure than spread it around their fields or pile it into lagoons, as pig farmers in North Carolina have done.

That's a waste of good waste. Instead, farmers could put the stuff in an anaerobic digester (a large metal vessel the size of a truncated grain silo), throw in some microbes that thrive in an oxygen-deprived environment, and then let nature quietly take its course. The process produces methane , which can be sucked into a pipeline or burned to generate electricity and heat. The slurry that is left behind is run through a press, leaving fibers (which can be used as a replacement for peat moss or as bedding for cows) and liquids (which can be further processed to make plant nutrient pellets).

This technology has proven popular in Europe. "In Germany, they have 5,000 digesters operational today," said Chris Cassidy, national renewable energy adviser at the U.S. Department of Agriculture. But in the U.S., manure-to-methane remains very much a niche technology.

Manure-to-methane is plagued by the same types of uncertainties that affected solar power in its infancy.

Manure-to-methane is a subset of the much larger biogas industry; i.e., producing methane from decomposing garbage or food waste. According to the Biogas Opportunities Roadmap (a report jointly published last month by the Environmental Protection Agency, the Department of Energy, and the Department of Agriculture), of the 2,000 sites producing biogas in the U.S., "only 239 manure-based digesters are in operation across the United States." Together, they provide enough energy to power about 70,000 homes and slash methane emissions by the equivalent of 2 million metric tons of carbon dioxide. Many of those farm-based systems have been backed by the Department of Agriculture. (This Energy Investments Maps shows the location of all USDA investments in renewable energy.) The manure digesters are particularly popular in dairy hotbeds such as Wisconsin, Vermont, and Pennsylvania.

The potential is much larger, however. The Biogas Opportunities Roadmap estimates that the animal manure produced in the U.S. each year could support some 8,241 digester systems that could collectively produce enough electricity to power nearly 1.1 million homes. The reason? We're practically swimming in the stuff. The map below, produced in 2009 by the National Renewable Energy Laboratory, charts the density of manure methane emissions. (I've dubbed it the Crap Map.) The hot zones are in North Carolina (pigs); Arizona (chickens); and New Mexico, Arizona, and California (cows and sheep). What's more, 37 states now recognize biogas as "renewable," which means utilities can use such power to help reach the state-mandated quotas for the use of renewable energy. And while other forms of domestic renewable energy are intermittent—like the sun and the wind—bullshit is constant. 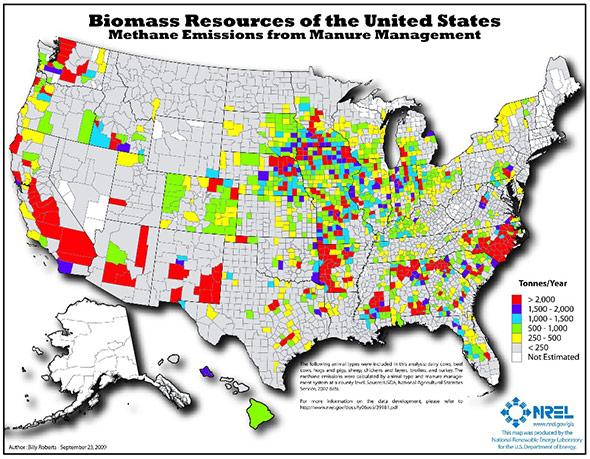 And there are signs that manure-to-methane is starting to scale up from cottage industries. In Lancaster County, Pennsylvania, Cliff and Andrea Sensening have installed a $1.5 million system capable of handling nearly 34,000 pounds of manure each year. In addition to using the stuff its cows produce, the farm pipes in cow, pig, and chicken refuse from neighboring farms. (Mixing hog manure, which tends to be runny, with cow and chicken manure allows the stuff to be pushed through underground pipes, like water or oil.) In Vermont, utility Green Mountain Power has a cow power program, which offers customers the option of paying an additional charge to purchase electricity generated from locally-produced manure,, and then enlist farmers as production partners.

There are obstacles. Anaerobic digesters are not yet cookie-cutter systems. Patrick Serfass, executive director of the American Biogas Council, notes a host of variables that come into play and affect the economics of a system: the amount farmers might be able to get for selling their electricity or methane into the grid, the existence of infrastructure like pipelines, whether the digester can handle multiple streams of fuel (dry chicken poop, runny pig manure, food waste).

Manure-to-methane is plagued by the same types of uncertainties that affected solar power—another form of distributed renewable energy production—in its infancy. For decades, solar was highly expensive. Every system was custom-built. Utilities weren't sure what to make of it. Because it took a very long time to gain a return on investments, government funding and subsidies were crucial. But in the last several years, falling costs and innovations in the business model and financing—the solar leases pioneered by Elon Musk's Solar City, for example—made harnessing the sun's energy an economic no-brainer for a rising number of customers. Now, animal poop awaits its Elon Musk.

Of course, even if a Tesla Motors of anaerobic digestion were to appear, turning manure into methane won't save the planet. Manure-to-methane represents an incremental improvement on resource efficiency, and it can displace emissions that would have resulted from burning natural gas or coal. As such, it falls into that important category of innovation that promises to reduce the impact of vital activities that are taking place, without causing a decline in quality of life or requiring consumers to change their habits. The production and consumption of meat and dairy products have a big impact on the environment: A study released this summer quantified the emissions associated with a vegetarian compared with a meat-based diet. If we all went cold turkey on meat (and milk and eggs), that would have a much greater impact on reducing emissions than, say, driving a Prius. But we live in a world of meat- and egg-eaters and milk-drinkers. And one of the most positive developments of our time is that more people around the world eat diets with higher levels of protein. So long as the global demand for protein is rising, it makes sense to limit the environmental impact of food production where possible.

Farm-to-generator may not have the same resonance as farm-to-table. But it is one of the least obtrusive ways we have of transforming a waste product into an energy source.