Energy giant Drax has sought to alleviate concerns about the environmental impact of its ambitious plans to shift from coal to biomass power, publishing comprehensive new sustainability data alongside its annual report last week.

The company last week confirmed that pre-tax profits rose last year to £166m, as the company continued work on "Europe's largest decarbonisation project whilst producing eight per cent of the UK's electricity". 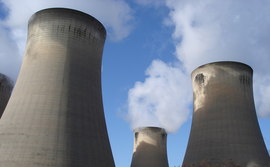 The report revealed that a third of the power plant's generating capacity is now the result of biomass generation, adding that its third converted biomass unit is due to come online in the third quarter of this year.

"We will deliver our biomass transformation plans, converting three units to sustainable biomass, on time and on budget," said Dorothy Thompson, chief executive of Drax in a statement. "We are delivering Europe's largest decarbonisation project whilst producing eight per cent of the UK's electricity. Renewable electricity from sustainable biomass is flexible and available 24/7, providing low carbon electricity, whenever it is needed."

However, the project has faced fierce criticism from some green groups, who have questioned whether the biomass used to power the converted units is sustainably sourced and delivering genuine emissions savings.

In response to the concerns, Drax for the first time published data on where it has sourced its biomass from alongside the annual report.

The data reveals the country of origin for the plant's feed-stock, as well as the type of fibre and the lifecycle emissions savings as calculated using Ofgem's solid and gaseous biomass calculator.

Overall, it confirms that Drax generated 7.9TWh of renewable power in 2014 compared to 2.9TWh in 2013, saving 6.7 million tonnes of carbon emissions over the course of the year.

The company also confirms 80 per cent of the 4.1 million tonnes of wood pellets it used came from the US and Canada with just 5,000 tonnes coming from the UK. None of the biomass used came from tree stumps or virgin timber, with the majority said to come from sawmill residues and forest residues.

As a result, Drax calculated the life cycle emissions of the biomass energy it generated stood at 34gCO2/MJ, compared to a government target for 2015 to 2020 of 79gCO2/MJ.

"I think it's sometimes taken for granted that we've transformed from Europe's second largest carbon emitter to its biggest carbon reduction project in a stunningly short time frame - most projects of this significance probably wouldn't have got out of the blocks yet," said Drax spokesman, Matt Willey.

"Our annual results for 2014 show 7.9TWh of our generation came from sustainable biomass in the two units we've now converted. With three units converted we will reduce our carbon emissions by 12 million tonnes - by my reckoning that's about the same as taking 10 per cent of the UK's cars off the road or decarbonising Luxembourg."

He added that the new data would hopefully serve to reassure green groups that the biomass the company is using will meet strict sustainability standards. "We know this only makes sense if we remain absolutely committed to using sustainable biomass," he said. "That means ensuring the forests we source from continue to thrive and grow, that biodiversity is protected and that we're using low grade wood. I think a lot of people want to see why we're so passionate that this is the right thing to do and that's why, for the first time, we've decided to make our biomass supply data publicly available."

However, Kenneth Richter of campaign group Friends of the Earth said that there were significant ongoing environmental concerns over Drax's use of biomass.

"The carbon savings quoted by Drax are fundamentally flawed because they are based on a calculator that assumes that biomass burning is carbon-neutral," he said. "I.e. it accounts only for peripheral GHG emissions from the transport, harvesting and processing of the biomass, but not for the bio-genic carbon; that is the reduction of the forest's carbon stocks."

He added that if the company used a different calculator for measuring biomass power's carbon impact, the Department of Energy and Climate Change's (DECC) new BEAC carbon calculator, it would likely result in a significantly higher carbon footprint.

The BEAC calculator was released last year and highlighted how carbon emissions from biomass vary massively based on how and where the wood stock is sourced from.

However, Drax's Willey stood by the company's latest figures arguing that claimed carbon savings from the plant's biomass conversion were credible, not least because the US forests the company is sourcing much of its biomass from are currently growing with net growth comfortably exceeding the amount of wood harvested.