The Difference Between a Pipe and a Tube

In the manufacturing industry one often hear terms such as steel pipes or steel tubing. Often times, it is often not clear what the difference is between a pipe and a tube.

Many people think that the word has the exact same meaning and use the word "pipe" and "tube" interchangeably. That's however wrong.

There are a couple of key differences between tubes and pipes:

A hollow cylinder has 3 important dimensions. These dimensions are:

These three dimensions are related by a very simple equation: 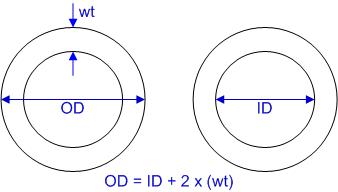 One can completely specify a piece of pipe or tube by supplying any two of these numbers.

Tubing is typically used in structures so the OD (or Outside Diameter) is the important number. The strength of a steel tube depends on its wall thickness. So tubing is specified by the outside diameter as well as its wall thickness. Steel tubes are also not only supplied in round sections but can be formed into square and rectangular tubes.

Pipes are normally used to transport gases or fluids so it is important to know the capacity of the pipe. Here the internal cross-sectional area defined by the ID (or Inside Diameter) is important. It is common to identify pipes in inches by using NPS or "Nominal Pipe Size". The metric equivalent is called DN or "diameter nominal". The metric designations conform to International Standards Organization (ISO) usage and apply to all plumbing, natural gas, heating oil, and miscellaneous piping used in buildings. A plumber always knows that the id on the pipe label is only a *nominal* id.

Generally speaking, a tube will have a consistent OD and its ID will change. Steel tubes used in structural applications would most likely be seam welded while pipes are normally a seamless steel product. Some steel tubes are also used in the transport of fluids, even though they are seam welded. These include steel tubes for water pipes and welded tubes are commonly used in the agricultural industry for manufacturing spindles. Such tubes will undergo a process called pressure testing were the tube is sealed at both ends and water is pumped through the tube up to a certain level of pressure. This will quickly indicate if there is a lead or a bad spot in the weld of the circular hollow section tested.